Do you know your Devons from your Phantoms? Your centre pins from your casting reels? Or even your priests from your gaffs?  These are all terms associated with the art of fly fishing, and in particular vintage fly fishing. In our recent Antiques and Collectors auction on 2nd October, a single owner collection of vintage fishing equipment realised a handsome £10,000 in hammer price. So what caused a splash as the fishing collectors rose to the bait to compete for these pieces of sporting history? Read on to discover what is so alluring about lures and what gets collectors “reel-y” excited in this buoyant collectors market.

In the 19th century, the romantic ideal of game fishing for trout and salmon on the British waterways became well established. Like many recreational pastimes, the art of fly fishing became commercially exploited by retailers in the late Victorian era. Hardy Brothers of Alnwick; Samuel Allcocks of Redditch; and Westley Richards of Birmingham are a few of the main producers of high quality equipment and tackle. Now in the 21st century, in the carbon-fibre age, and with the technology available for production of new materials, many still hark back to the Golden Age of fishing. Although most vintage and antique rods, reels, and equipment are now collected for displaying, some do still buy to use these handsomely crafted pieces of equipment. 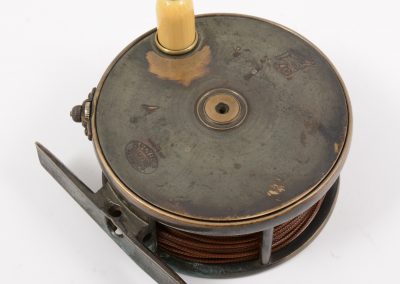 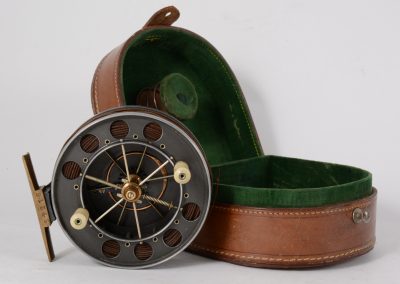 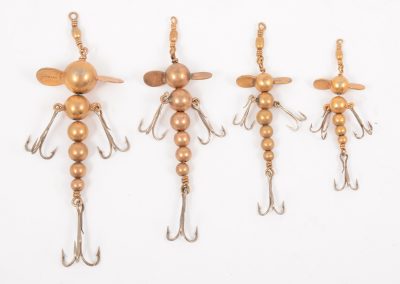 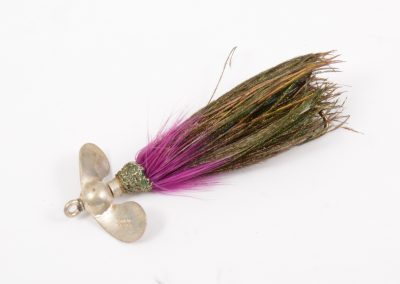 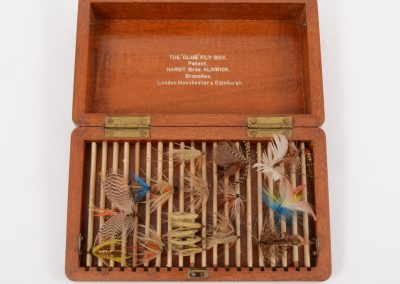 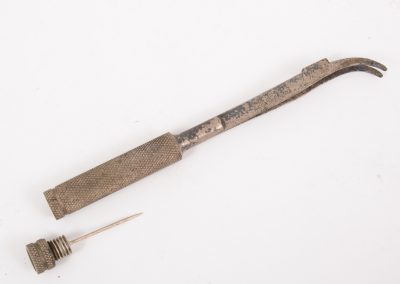 The reel section of this collection provided the most competition once the bidding had opened. Most offered were from the first quarter 20th century, but the top lot dated to the late 19th century. A fine example in near original condition, the Hardy all-brass 4″ salmon fly reel was a rare example. The maker’s Rod in Hand logo stamped to one face plate helps to date the reel. Bidders from far and wide tried to land this one, with the top bid coming in at £2,600.
A respectable second place fell to another maker – Allcocks – and another fine example of their Allcocks’ Aerial reels. Again with 4″ drum, this centre trotting reel exudes quality, even down to the fitted case it came in. Even a non-fishing enthusiast would find it hard not to see the beauty in the open engineering of this design. We’re reliably informed that these reels are still hard to beat. This one took £1,500.

Arguably the most important part of any fisher’s equipment – if the fly isn’t right, the fish won’t bite! The general term of tackle has many subdivisions, falling into dry flies, wet flies, lures, etc. The many different styles, sizes, and colours, that have been made since the 19th century make these a niche market in their own right. This collection had a good selection on offer, ranging from the handmade dry and wet flies, to commercially produced lures, spoons, phantoms, etc, by the main retailers. Notable highlights included a set of four Allcock’s golden Water Witches, and an attractive Hardy Halcyon Spinner. These formidable looking lots realised £270 and £55, respectively.

There are many tools to any trade and so it should come as no surprise fishing enthusiasts carry a range of tools in their creels for any eventuality when out in the field (or river!). It is again the quality that stands out for collectors with items from the late-19th and early-20th century. Some accessories would no doubt be bought for continued use, whilst others make the finishing touches to an attractive display or study. Line driers, Hardy fly boxes, a fly-maker’s dressing tool – they may not appear to be much to many, but to a few they are cherished items of the vintage age.

If you have similar items, or a collection, that you are considering selling or would like advice on then we would be delighted to help you. Contact the Valuation team on 01858410414, email sales@gildings.co.uk or submit an online enquiry here.